The Maelstrom International Fantastic Film Festival returns to Seattle this coming weekend. The Animation Shorts program is screening on Saturday, October 6th at noon at the SIFF Film Center. Click here to buy tickets.
The program consists of 14 shorts, including Don Hertzfeldt’s It’s Such a Beautiful Day. If you didn’t catch this when Don had his own retrospective at SIFF Cinema earlier this year, I highly recommend going. The trailer is below.

The other 13 shorts seem to be roughly 50% computer animated and 50% either stop-motion with puppets/objects or drawn animation (some with heavy compositing)- a pretty good ratio!

The Local Sightings Film Festival is the best film festival in Seattle – at least according to the Seattle Weekly. And yes, it’s hosted by the NW Film Forum, and yes, I (Tess Martin) been volunteering in their office for the past two years. But still, this festival rocks, and I’m super happy that two of my recent shorts are screening in the Experimental Shorts program. It’s on Tuesday, October 2nd at 9PM.
The two shorts screening are The Whale Story, created with the help of around 20 volunteers in Cal Anderson Park, just a few blocks away from the NW Film Forum. The other film is Hula Hoop, a 1.5 minute short originally conceived as part of a collective film by the Seattle Experimental Animation Team, which also rocks. Both are great to see on the big screen – The Whale Story because the whale looks really BIG, and Hula Hoop because the sand looks really TINY.

And when you arrive at the NW Film Forum, look up! You will see an installation of animation projected onto kites! This is an iteration of Flying Cinema, an ambitious SEAT project spearheaded by Webster Crowell. And if you like animation, you must of course also attend SEAT animator Drew Christie’s program he has all to himself, The Drew Christie Show, this Saturday, Sept 29th at 9PM.

Here are a few of the shorts from members of the Seattle Experimental Animation Team that are playing at SIFF this year:

May 19th, 10AM – Tess Martin’s Hula Hoop as part of the 3 Minute Masterpiece Seattle Times screening (this screening is free!). Vote online for it here, for a chance to win the People’s Choice award!

May 24th, 8:30PM – Salise Hughes’ Erasable Cities is playing as part of the ALT Shorts program.

Still from The Whale Story

May 26th, 9:30PM – Tess Martin’s The Whale Story is playing as part of the Animations for Adults program.

First off, let me just say, there is a TON of animation showing at the Children’s Film Festival (Jan 26-Feb 5 at the NW Film Forum). There are 11 shorts programs, organized by themes (click here for the full schedule). I’ve gone through and sorted out which programs have the most stop-frame animation (whether dawn or puppets) rather than live-action or computer animation:

If you’re really into drawn animation, there are two shorts programs that seems to be pretty much comprised of this:

If you’re more into stop-motion with objects and puppets rather than drawn, there is a program for little little kids called  Touch My Heart: Gentle Films on the Big Screen (Jan 27 at 11am, Feb 5 at 11am) that has a knitted film, one made with cardboard, and a few other stop-motion.

These are the ones with the MOST stop-motion, but truth be told, every single shorts program (11 altogether!) has a least one or two stop-motion animations. So go out and catch them!

The other big animation is the opening night feature, and here is my rant about that:

I’m torn. I absolutely loved Micel Ocelot‘s ‘Princes et Princesses‘ when I first stumbled upon it in my university library seven or eight years ago. It was a fun film, a short film, but a long one, if I recall correctly, composed of vignettes of a girl and a boy play-acting different fairy tales. It was made in a Lotte Reiniger style of back-lit cut-outs, and they were ingenious, and moved beautifully. Then Ocelot made ‘Azur et Asmar‘ a computer animated feature that echoed his two dimensional cut-out style.
It was ok. Not great. There were some fun moments, but overall I found the story went downhill two thirds of the way through and I was disappointed with the animation. What a waste, I thought! Surely he has now learned that he should not have strayed from the simplicity and grace of his stop-motion technique! Alas, that was not to be. His latest film is called ‘Tales of the Night‘ (Les Contes de la Nuit) and it will open the Children’s Film Festival at the Northwest Film Forum tomorrow (Jan 26th) at 7PM.
From what I can tell, it seems to be very much inspired by his short Princes et Princesses, except it focuses on one fairy tale and is longer. He is using computer animation to closely imitate his stop-motion technique, and maybe the restriction of the having the figures silhouetted will reign in the temptation to go CG-crazy. But you decide! I’ve included below clips or trailers from all three films.

Tales of the Night

Tess Martin’s animated short Plain Face is screening at the Victoria Film Festival on February 11th as part of the Animation Alive! shorts program. I will be attending! I’ve never been to Vancouver Island before, so this should be fun.

The Eyeworks Festival in Chicago looks so great! Wish I could attend. Here is a great interview with the organizers. I love their description of the work represented at the festival – somewhere between experimental and commercial work. Portland-based animator Lori Damiano is festival guest. Check out the full program, AND animated festival trailer comprised of posters, here.

Tess Martin’s latest short Plain Face has been accepted into the Se-ma-for Film Festival in Lodz, Poland – this is a festival dedicated to stop-motion animation and occurs Sept 22-25 2011.

It’s also been accepted into the Atlanta Underground Film Festival in Atlanta, GA, that occurs the same dates, Sept 22-25th. Plain Face will be playing as part of ‘Animation Attack 2’ on Friday the 23rd at 10PM. If you know anyone in Atlanta, or Poland, for that matter, spread the word!

It’s official! Tess Martin’s latest short film Plain Face will have its World Premiere at the Seattle International Film Festival on May 28th as part of the ‘Between the Silences’ short film program that screens at 1:30PM. Mark your calendars. And last but not least, the DVD will be released at the very same time – 1:30PM, May 28th, on Indieflix.com. The DVD includes the Plain Face short, two previous short films, a 10 minute Behind the Scenes featurette, and even more!

Artist Trust recently announced that the applications for their 2011 Fellowships are due February 25, 2011. This is an annual award of $7,500 – it’s annual but each year only certain fields are eligible to apply. For 2011 they are: Emerging Fields & Cross-Disciplinary, Performing, Visual and Traditional & Folk Artists. For 2012: Music, Media, Literature and Craft Artists. Past recipients include Stefan Gruber, Britta Johnson and Sarah Jane Lapp, all animators.

Artist Trust is running a grant application workshop on February 10th for all grants, and, according to their e-newsletter they will be hosting a webinar called ‘Applying for the Artist Trust Fellowship’ on February 8th, but there’s no info on their website about that yet.

4Culture’s Individual Artist grant is also available – the deadline for this is March 9th. Up to $8,000 awarded!

I also came across this really interesting opportunity called smART Power – it might appeal to those artists and filmmakers out there who have experience working with youth or communities.  I know I’m pretty excited about it. It’s a partnership between the US Department of State and the Bronx Museum of Art. This is a quote from the Department of State announcement: “smARTpowerSM will send American visual artists abroad to collaborate with local artists and youth in creating original community-based works of art in China, Ecuador, Egypt, Ghana, India, Kosovo, Lebanon, Nepal, Nigeria, Pakistan, Philippines, Kenya, Sri Lanka, Turkey, and Venezuela.” They will award a $11,000 honorarium + up to $10,000 in expenses and send an artist to one of the above countries for 45 days!  Deadline is February 28th.  Find all the info here.

Have a good one! 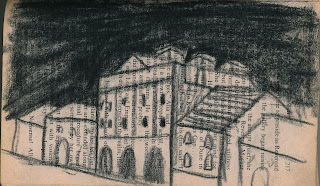 Congratulations to Drew Christie, whose short ‘The Man Who Shot The Man Who Shot Lincoln’ won best short at this year’s Local Sightings Film Festival, held at the NW Film Forum. Drew will receive a $500 cash prize as well as $500 of studio time and equipment rental. Woo!